In the previous article, I explored installing and running .NET Core 3.0 on a Raspberry PI running Raspbian. In this article I intend to create a simple console application that will interact with the GPIO and flash an LED.

What is a GPIO?

GPIO stands for General Purpose Input Output. A GPIO pin has no predefined purpose - i.e. they are unused by the main device and can be configured as input or output and can be controlled by an application. The Raspberry Pi has two rows of GPIO pins, as well as others. Output pins are like switches that your app running on the Raspberry Pi can turn on or off - common uses include turning on LEDs, but they can be used for more advanced communication with devices.

Input pins can be turned on and off by external devices such as switches, however they too can be used for more advanced communication with devices, such as receiving information from sensors.

So how can we interact with the GPIO? Fortunately, there are a set of NuGet packages that do the heavy lifting for us the source is hosted here - https://github.com/dotnet/iot.

To quote the repository:

.NET Core can be used to build applications for IoT devices and scenarios. IoT applications typically interact with sensors, displays and input devices that require the use of GPIO pins, serial ports or similar hardware.

This repository contains the System.Device.Gpio library and implementations for various boards like Raspberry Pi and Hummingboard.

NOTE: This repository is still in experimental stage and all APIs are subject to changes.

This library provides the means to interact with sensors via GPIO, SPI, I2C and PWM. You can checkout the documentation here.

For this article, we will focus on plain vanilla GPIO.

Before we go any further though, let's explore something that will make our development much simpler - VS Code Remote Development.

To quote the VS Code Remote Development page:

Visual Studio Code Remote Development allows you to use a container, remote machine, or the Windows Subsystem for Linux (WSL) as a full-featured development environment. You can:

We will focus on using the Remote - SSH part of the extension to aid in our development.

Success! We now have the convenience of editing our code in Visual Studio Code.

We'll now update our application to interact with the GPIO bus and flash an LED... I know, global electronic domination follows... BTW, I bought a kit from Freenove via Amazon that has a huge variety of components: Freenove Ultimate Starter Kit for Raspberry Pi 4 B 3 B+, 434 Pages Detailed Tutorials, Python C Java, 223 Items, 57 Projects, Learn Electronics and Programming, Solderless Breadboard

Next we will extend the sample above by adding more LEDs which we will use to display binary numbers. You can either connect individual LEDs, or an LED Bar Graph component (one is included in the kit I linked to above): Note: It is hard to determine which way round to fit these, you may have to rotate it if none of the LEDs come on...

Once complete and running, the LEDs should display an incrementing value in binary.

Note: If the LEDs don't light up, turn them around - it is easy to put them in the wrong way. 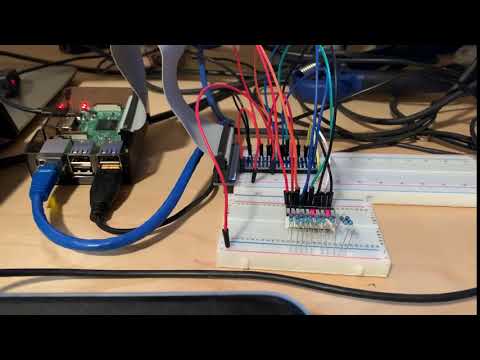 OK - so now we have worked out how to flash some LEDs by using some pins in output mode. Let's add a switch to our circuit and use it to reset count.

Now we are going to add a switch to the circuit and check to see if the switch is pressed each time we loop.

So in this article we explored using the the GPIO in both output and input modes. In the next article I will start to explore I2C.